A three-times reigning champion lost his crown at Goostrey Gooseberry Show to the lightest berry put on the scales for the top trophy since the mid-nineteen eighties. Grower Peter Goode, whose premier berry has been the heaviest in the past three years, lost the title to veteran Terry Price, winning the show for the ninth time. But Terry's berry, a Just Betty variety tipping the scales at 24 pennyweights 22 grains, was a mere tiddler compared to weights for the heaviest berry in previous shows of  more than 30 pennyweights.Terry, the show president, predicted that  weights would be down on other years because of the  combination of heat, rain and cold during the peak of the growing season. "It was the smallest premier berry I've ever had, and I  didn't really think it had a chance of winning the show," he said.  "It has been the worst growing season for years with berries bursting all over the place."  Terry, who has several times won the Mid-Cheshire Association cup as the top grower,  had the satisfaction of winning prizes in almost every class and carried off six silver trophies to put on show at his home in Twemlow Green. Peter, raising his berries on an allotment  at Byley managed only eighth place in the challenge for the premier award with  a Montrose berry weighing 18 pennyweights 8  grains. He was expected to win a top prize again at this year's show at the Crown Inn, but Peter blamed his lack of success on a  late hard frost in May which ravaged his crop. The poor season was confirmed when Kelvin Archer was unable to raise a Montrose gooseberry for the Lower Withington show of more than 30 pennyweights 18 grains compared to his world record Millennium berry in the Guinness Book of Records of 41 pennyweights 11 grains.  Another long-time grower Nick Hassall was pipped into second place with his Montrose at 24 pennyweights 11 grains and third was Emma Williams, the show secretary, with a Lloyd George of 23 pennyweights 4 grains.

Emma also won a trophy with the only triplets in the show, a trio of Newton Wonders weighing 36 pennyweights 8  grains, and Griselda Garner from Blackden topped the scales with Just Betty twins at 30 pennyweights 16 grains.
In the under sixteens class, Joe Banks Williams, aged seven, collected a silver cup for a Woodpecker berry of 16 pennyweights 5 grains.
*Double click images to enlarge
www.blogsfromthebongs.blogspot.com

A battle-of-the-bulge is being fought about these parts as rival gooseberry growers defend their crops against a massed invasion of sun, heat and rain threatening the growing fruit. The sudden burst of sunshine gave a bumper harvest a ripening spurt  some weeks too early for the annual gooseberry shows starting this week-end and continuing into next month in a string of villages.  But  growers fear there will be no new records to be set this year unless they can stem the attack from the elements and the added pest of swarms of wasps poised to do their worst among the bushes.  Growers here in Goostrey, where one of the biggest shows is being held this Saturday (July 30) at the Crown Inn, reported a major attack of mildew in June. Now having saved their berries from the ravages of the  disease many of the most promising juicy heavyweights are bursting without warning as a result of the mix of sunshine and showers over the past weeks. Terry Price, veteran champion grower and president of Goostrey Gooseberry Society, says he does not believe there will be many berries left that could tip the scales at over 30 pennyweights unless growers are very lucky.  "Berries are bursting like hell," he said. "What I have seen so far suggests to me if you have a premier berry of between 27 and 29 pennyweights it could be a show winner."   Gooseberry growers by nature, however, are a canny breed and really never like to divulge to rivals how their berries are progressing,
and only on show day when their wax-sealed boxes are opened for the weigh-in is the truth revealed. The shows may be a quaint village ritual from the past but  to enthusiasts it is serious business with big prize-money and silver trophies as the spoils to be won.  Russell Burns, patron of the Yellow Broom restaurant, Twemlow,and a Goostrey show sponsor, is reportedly nurturing a "real whopper" of a berry on his bushes but it will be touch and go if it survives for his Swettenham show a week on Saturday.  "It is a really nice berry and I reckon if  he is lucky and it doesn't burst it could win the Mid-Cheshire Association trophy for the heaviest this year," said Terry.
The competition among growers to produce the heaviest gooseberry began in the 18th century and the oldest existing show is at
Egton Bridge in Yorkshire founded in 1800. They were once held all over the industrial north of England but, apart from the Egton 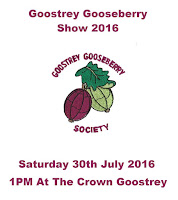 show, only eight survive, all in Cheshire, at Goostrey, Holmes Chapel, Allostock, the Crown of Peover, Over Peover (The Dog), Lower Withington, Marton and Swettenham Club.  The Blackden Trust based at the home of author Alan Garner and his wife, Griselda, near Jodrell Bank, maintains the official gooseberry archive of the many-named varieties of trees.  Local grower Kelvin Archer, a gardener at Rode Hall, is the present holder of the title for the heaviest gooseberry. His Millenium-named berry tipped the scales in 2013 at 41 pennyweights 11 grains to earn him a place in the Guinness Book of Records.
The Goostrey show at the Crown, like all others,  is open to the public when the sealed boxes are opened at 1 pm for weighing and the
open show for juniors under 16.
www.blogsfromthebongs.blogspot.com
Posted by John Williams at 08:51 1 comment: 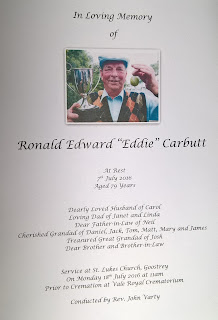 He was named Ronald Edward Carbutt but to me and all of his friends and family he was known as plain Eddie. He was noted for his warmth and humour and for the flat cap that symbolised his country roots when it was worn by one of his grandchildren at  his funeral service today in Goostrey. Eddie was a person you instinctively liked, friendly, helpful and always with a welcome at his home at Blackden Firs where he cared for a large garden and land. The packed congregation at St Luke's Church was a celebration of his life led by Carol, his wife of fifty-one years, and a tribute to his many friendships in 79 years since his birth in Marton. And it was also fitting that Eddie's picture chosen for the service sheet was of one of his proud moments when he won another trophy for his legendary prowess as a competitive gooseberry grower. He was previously a member of Goostrey Gooseberry Society and still held the record for the heaviest berry at the annual show, a Woodpecker of 37 pennyweights and 14 grains grown in 1991. In more  recent years he continued to compete at the Swettenham show.  His varied working life included roles as a mole catcher, gardener, farm worker and running his own turf haulage business. Above all though he was one of the nicest of people you would wish to say was a friend. The service was followed by cremation at Vale Royal Crematorium.
*Double-click image to enlarge
www.blogsfromthebongs.blogspot.com
Posted by John Williams at 06:16 1 comment: