The village has been on a bit of a knife-edge this week - or possibly should say weather watch - in the run up to Goostrey Rose Festival. My lucky rabbit's foot told me it would be fine and sunny this Saturday. But had a bit of a shock when I checked just moments ago - the forecast has turned to rain! But optimism shines. As I write the sun is beaming through the window, same as yesterday, when it was doom and gloom. I won't utter the words "We are doomed" for the festival as I might be sent down by the judge for giving away one of this year's best kept secrets in the time honoured  parade of decorated floats.
Margaret Kettle, a veteran of the event as former Rose Queen in 1936, tells me there have been more wet days than fine ones. When she was made President in the mid-eighties she got a red umbrella which since then has acted either as parasol or brolly depending on the state of the day. Like many villagers she has turned out over the years as one of the costumed characters, among them Charlie Chaplin, Barbara Cartland  - and of all celebrities and stars, Jordan!  Margaret, now nearing 90, will be involved with Goostrey WI float but like all others what it will represent is a closely guarded secret. "I couldn't possibly tell you what it will be," she says.
Rose Queen Alice Keeling, who will ride in state for her crowning, is from a family with ancestral links to the festival first held in 1905. Her mother and grandmother were queens attendants and great, great aunt Alice Bayley was crowned in 1925. The first traditional act of the soon to be crowned queen is for five minutes of prayer at the cenotaph conducted by the vicar, the Rev Ian Godfrey. Ian's wife, Audrey, says she hopes Alice will be well supported in this act of remembrance outside St Luke's Church. It is often missed by festival crowds making for the main event on the school field. There is a full programme of family fun and events, including maypole dancing by Goostrey Primary School, the Ka Ramba Samba Band and Bruce Airhead's comedy cabaret, a regular at Glastonbury.
Let's hope  he has left the rain behind him !

SHOW GOES ON AS CLOUDS ROLL AWAY 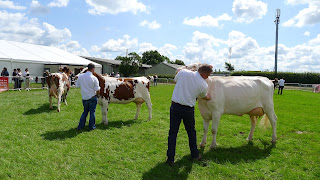 I'm afraid I missed the Countess of Wessex - the first Royal to visit the Cheshire Show in a dozen years. But Royal patronage or not, the event at Tabley lived up to its reputation of being among the best of county shows. It is flagged up as the town meeting the country and it certainly didn't disappoint the thousands on the first of the two days. This year remarkably in a near week of incessant rain leaving the showground a tad spongy, the dark clouds rolled away just in the nick of time. 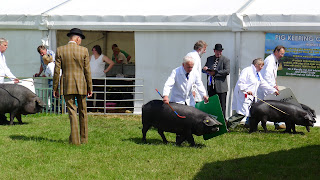 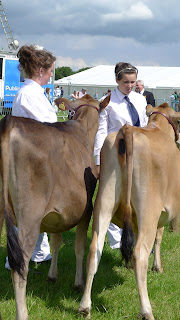 I guess Goostrey was well represented in all the  the animal classes and events, and certainly Goostrey WI members are feeling pretty pleased with themselves with a silver trophy to bring home for their competition entry. Jodrell Side WI was also well represented with a delightful entry in the same competition. 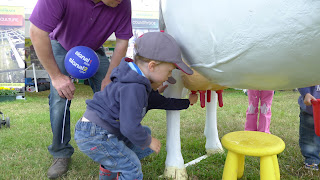 What I find comforting is that farm-based enterprises  offsetting loss of income from traditional farming continues to flourish in Cheshire as well as in other counties. One young man, Henry Cureton, whose family has lived and farmed in Shropshire for 300 years, brought a selection of game products to sell.
Henry's great grandmother made cheese for the Royal family and he is the fourth generation to cook and bake pies in the family kitchen at Ellesmere. 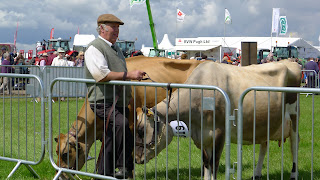 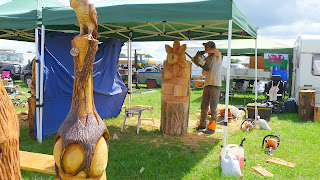 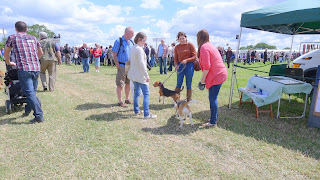 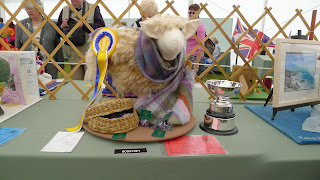 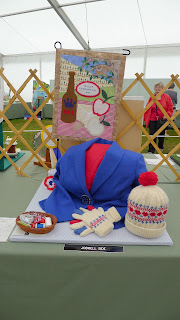 The controversy over plans for a waste plant at Twemlow is to be discussed tonight (Tuesday, June 12 ) by Goostrey Parish Council. The council, which is urging villagers to attend the meeting to voice their concerns, will be considering its stance on the application. The plant at the former Ministry of Defence site between Twemlow and Goostrey will process silage, slurry and food waste on an industrial scale. Opponents of the plan claim that extra traffic and odours from the plant will affect a large part of the surrounding area. Campaigners against the development have an email contact point TAGnotowasteplant@gmail.com Objections to the proposal have to be lodged with Cheshire East Council by June 20.

It was grim weather we all admitted but the village has seen far worse when flags and bunting are unfolded on grand occasions. Goostrey parish council, not to be fazed by the prospect of rain, organised a splendid event for the Queen's Diamond Jubilee and I think the members are owed a big thank you, as well as the uniformed organisations who kept us all warm with a steady supply of tea and coffee, burgers and hot dogs!   The Queen was engaged elsewhere but she sent her greetings and Margaret Kettle proved to be a great understudy for Her Majesty. Not to be outdone, Margaret wore a crown and I noted that she also managed a little jig during one of the lively tunes played by Silk Brass Band of Macclesfield. Parish councillors said they were delighted with the support of the village and I guess, the only downside is they had to dig into funds to hire a tent to shelter the band!
*Click on the pictures for a larger image 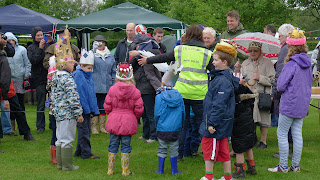 THE TALE OF THE HEDGE IS A REAL TREASURE

I’ve been a little bothered with an irritating eye infection. So writing has been out of the question. But now I feel motivated – given some medication – to resume where I left off a couple of months ago.  Like most would-be bloggers inspiration is the spur. And it has come from an unlikely source – a book about hedges. I know it doesn’t appear a subject to inspire. Like the author Hugh Barker, however, I’ve had a lifelong obsession for hedgerows that straddle the British countryside!  And when Hugh’s book was abridged on BBC4  last week I just had to get a copy for myself.
I was not disappointed. I’ve barely put Hedge Britannia down since it came by courier this week. Its highly readable text has reminded of boyhood when many an hour was spent following the line of hedgerows dividing the fields near where we lived. They were the source of adventure and I guess an all too vivid imagination in wartime of what might lurk or be hidden among their roots. I once found a cache of coins (not ancient sadly) but the few half crowns and shillings were a fortune to a nine-year-old! How they got there I could only guess; possibly the proceeds of a robbery or, more likely, slipped from the pocket of a toiling labourer as he ate his “snap” protected from the heat of the day by the hedge canopy. I’ve no recollection what I did with the hoard. I reckon I must have spent it!
Many years later in Goostrey I made an exciting discovery (well, it was to me) in the hedge of my bottom field. There, firmly gripped between two ancient branches, was a large, old fashioned beer bottle. I can imagine some labourer long since dead would have left it there perhaps a century ago as he cleared the hedge bottom. Having released it with some difficulty from the grip of the hedge, it is now among the collection of broken pottery, bits of old iron, bottles and horseshoes that I’ve rooted up from the land (and now helped by two enthusiastic grandchildren) in search of treasure !
Since last in blog mode, the village has been pleased to see The Crown reopen under new managers – and by all accounts (and a brief visit) five or six types of real ale and a new menu are now on offer. Little has been done in the way of refurbishment, much to the relief of regulars who fear for its character, but word has it that eventually it is likely to become more of a pub grub establishment than at present.
Goostrey is poised to celebrate the Queen’s Diamond Jubilee this week-end with a Big Jubilee Picnic on Sunday at the Pavilion Field, Booth Bed Lane
. It promises to be a jolly village affair with brass band, barbecue, balloon race and presentation of jubilee medals to local children. Let it be a rain free day!
Posted by John Williams at 09:25 1 comment: