I hear there has been a tremendous response to Goostrey's new footpath  highlighted in my last blog. One villager I encountered had just attempted the footpath - by bike! Not the best or ideal way as getting stuck in  one of the new kissing gates encumbered by the machine could have had a less romantic end! However, I am assured by the gentleman concerned that he will be walking next time. He says it  was  wonderful to experience the delights of the new public right and can certainly recommend it.  Sadly, I did not get to the official opening on the Bogbean but Roger Dyke, a member of Goostrey Footpath Group, has kindly sent me a report and several pictures of the event which I am only too pleased to publish as the rest of this blog. 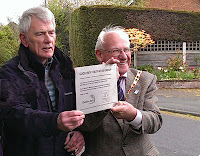 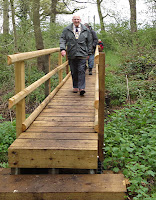 At the Bogbean in the shelter of a gazebo that had to be held down against the wind, Goostrey Guides provided light refreshments and then Bill Owen outlined to the Mayor the long history of the project, from the Parish Council and Residents Association original initiative in 1995 to the present day, and thanked the County Farms team and the County’s Public Rights of Way team for their wholehearted support of the project, without which nothing could have been achieved.
Particular thanks were also recorded to the Manchester Airport Community Fund, for its substantial financial contribution to the actual construction of the path, with its many bridges and kissing gates.
In return the Mayor congratulated the Goostrey Footpath Group on the tenacity with which the project had been pursued over the 17 years, and complimented Bill on the key role he had played personally in the extended negotiations.
The newsmen’s cameras clicked and flashed as the Mayor presented Bill with a Commemorative Plaque, and the new footpath was declared officially Open.
With the weather improving the party made its way down and along the new footpath to Valley Farm Wood, where a token ribbon was cut for the benefit of the press photographers.
Despite squelchy conditions underfoot the Mayor walked with the ceremonial party through Valley Farm Wood and on into Galey Wood where he joined in the installation of the Plaque on one of the many new bridges.
The first new public footpath in Cheshire East for four years was definitely Open for Use….
Colour leaflets describing the path (and outlining two walks) are available – free – from Mrs Kettle’s, Goostrey News and Goostrey Home & Leisure.
Posted by John Williams at 06:06