NOT EVEN THE PIG'S WHISTLE WAS LEFT ! 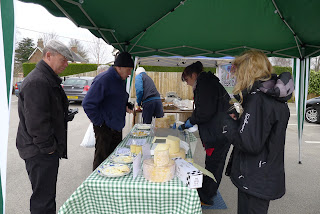 If I hadn't been there, I don't think I would have believed it - a couple buying cheese to pack in their baggage for France ! Our neighbour across the channel has probably more varieties of cheese than anywhere in the world. But, let's face it, a goodly hunk of Cheshire takes a lot of beating. And so this Saturday I found myself outside Goostrey's Crown Inn buying cheese from the same stall as the couple at the launch of the monthly farmers' market. They lived in France they told me but there was nothing like a bit of local farmhouse to remind them of home !  The market was flagged up for several weeks and in spite the bitterly cold day with more than a passing hint of snow flurries there was a  fair turnout of stallholders doing a brisk trade. So much so that several ran out of produce long before the end.  The lady selling cheese was doing a good deed standing in for the stallholder after her own craft-baked bread stall sold out. And a delighted Pig & Co from Blackden didn't even have the proverbial pig's whistle left to offer latecomers ! 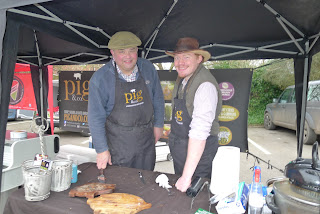 Penny Clark from Wilmslow, who makes a range of special preserves with an old  school pal Sarah Langley, said she was delighted with  support from the village and would certainly be returning in March. "I didn't expect so many would turn up because it is so cold and this was the first market but the support of people has been tremendous," she told me. Julia Ryding from Billinge, Lancashire, a regular at seven other markets with her hand-made cakes, agreed it had been a wonderful atmosphere and would be back with her stall, too. "It took me only half an hour to get here so it really is good."   Huw Rowlands offering beef from his herd of red poll cattle at Mickle Trafford was also a very happy farmer but concerned if he would have anything to sell the next day at Whitchurch  such was the demand for his home-raised meat. 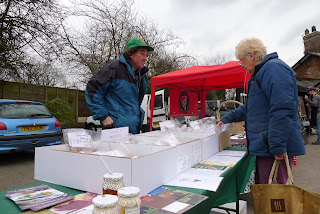 All in all it was a great  morning out for the community - some I know had been in the pub the night before but still managed to rise early - and a tribute to the new owners of the Crown, optimistic the monthly event on the car park will become a regular feature of village life.
Goostrey's next farmers' market is on March 30.
Meanwhile, the deadline for public comment on Cheshire East Council's proposed Local Plan looms on February 26 but the parish council has been working hard to rally support in its bid to have Goostrey's designation  changed from a Local Service Centre to a Sustainable Village. This would minimise the amount of future development for the life of the plan up to 2030.Every household should have received a model letter  with space for individual comment  to send off before the deadline. The alternative is a Goostrey possibly swollen by new homes for more than 1,000 newcomers ! The LoveGoostrey website has all the details.
Posted by John Williams at 17:01